On Monday I was lucky enough to see the newly reformed Dubstar live at The Lexington in London.  I’m not even sure why but I never managed to see them live first time around, even though I was a huge fan, so it was imperative that I saw them this time and The Lexington was an ideal venue in which to experience them – small and intimate with great sound. 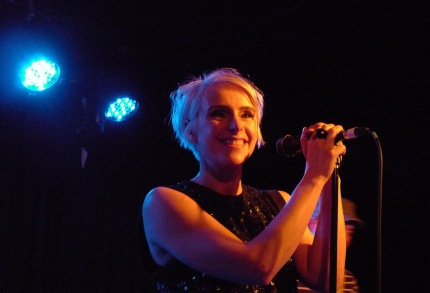 Before the gig I thought about my ideal set list and I really hoped they would play any or all of the following in no particular order:  Stars / The Day I See You Again / Not Once, Not Ever / Inside / No More Talk / The View From Here / It’s Over / Let’s Go / Mercury / La bohème / Arc of Fire / Believe in Me / Swansong / Take It / In My Defence / Disgraceful / Say The Worst Thing First / I Lost A Friend.  I didn’t quite get everything I wanted but it was an amazing set and I managed to get the set-list to evidence that: 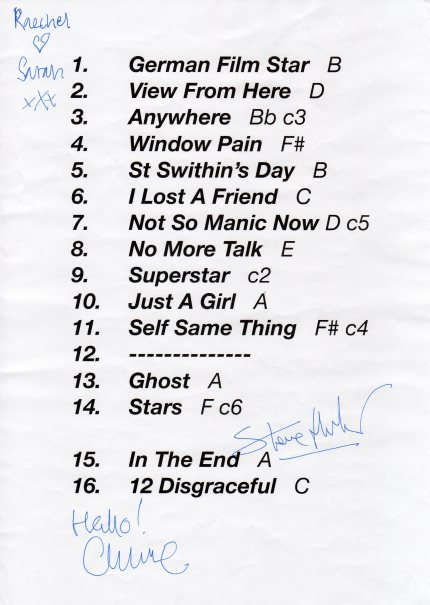 Yes, it’s signed by all 3 members of the band, much to my delight.  But before we get to that, let’s go back to the music.  I wondered how the band was going to recreate something close to their studio sound with just the three of them but they managed admirably with Steve Hillier (chief songwriter, and a good one at that) taking on both bass and keyboard duties.  Here’s his set-up: 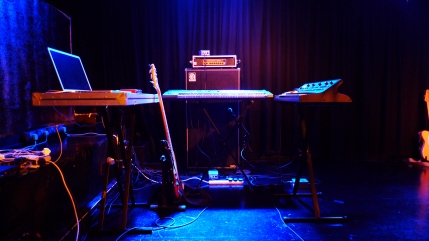 The lads, as I seem to refer to them, are obviously seasoned performers and appear to take it all in their stride whereas the utterly delicious Sarah Blackwood gets very nervous (which I can absolutely empathise with as I was once in a band myself many years ago and used to get the wobbles on stage too).  No matter as she carries it off very well and is just so lovable that you can feel the audience all willing her to do well – and she does, whatever she may believe.  I have to say that back in the day I had a little lady crush on Sarah – if I could look like anyone else (I certainly don’t want to look like myself, that’s for sure!) she’d be high up on the list for me.  And I can vouch for the fact that she still looks amazing. 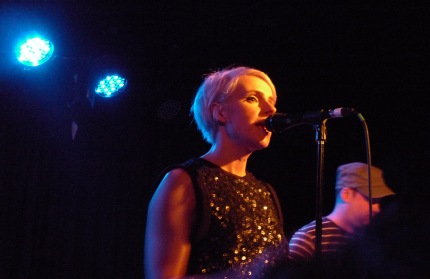 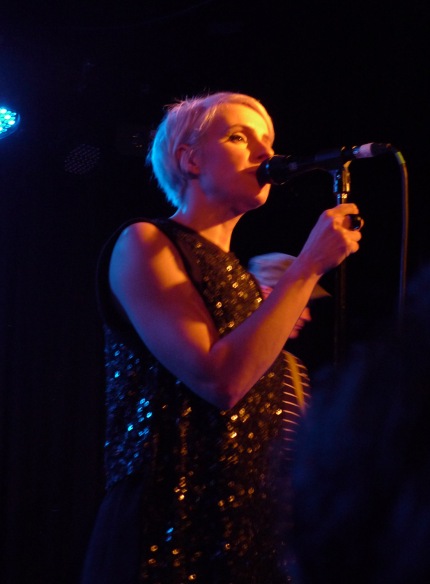 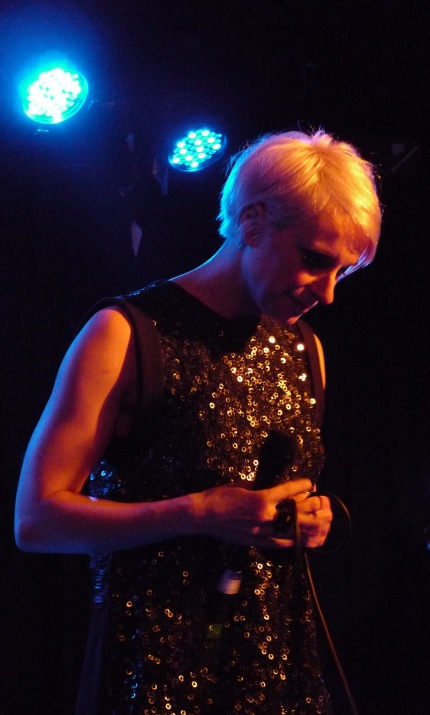 The set started off with a cover of  I’m In Love With a German Film Star originally recorded by The Passions in 1981.  This track was recorded by Dubstar for an Amnesty International compilation in 2010 and it really does sound in keeping with the rest of the band’s work – a good way to kick off the evening.  It was followed by View from Here, which is an absolute favourite of mine – it’s kind of anthemic but on a small scale basis, ie not one of those anthems that makes you want to vomit because it’s been knowingly written as an anthem.  It’s also got a bit of a James Bond twang going on as well.  Chris Wilkie makes it look so easy as well – what a b******! 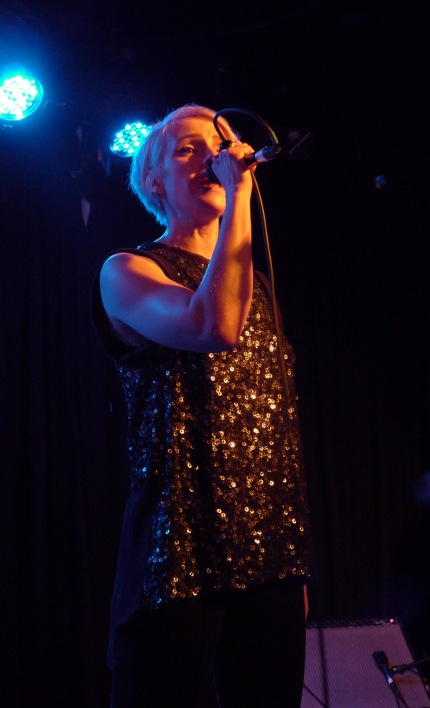 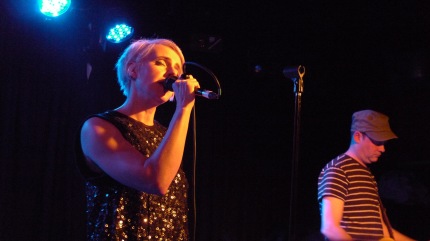 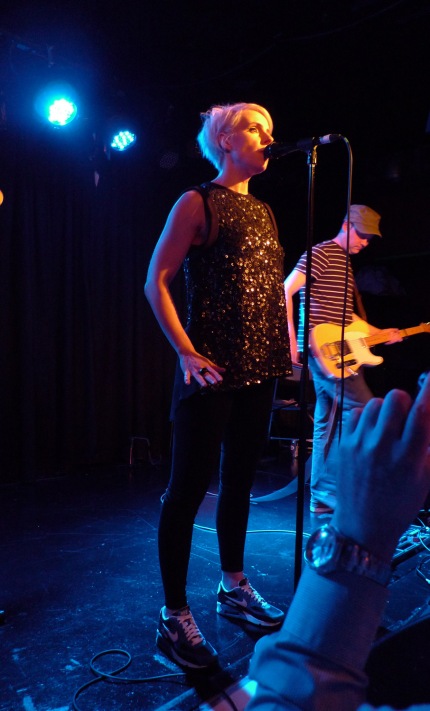 There were three new songs in the set: Window Pain,  Superstar and In The End.  I remember liking them all but I can’t tell you what they were about as they were new to me.  I’d love to tell you that Superstar was inspired by a 1970s TV show featuring Britain’s sporting superstars, presented by David Vine, but it wasn’t – it’s about a superstar.  Sarah Blackwood should be a superstar but she’s a bit shy for that – that only makes you like her more though. 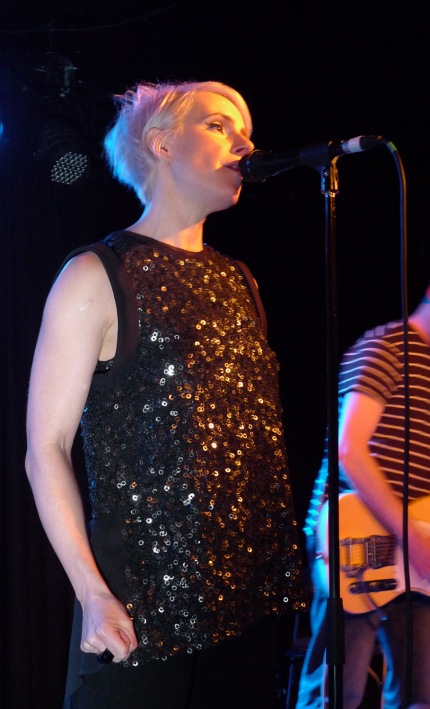 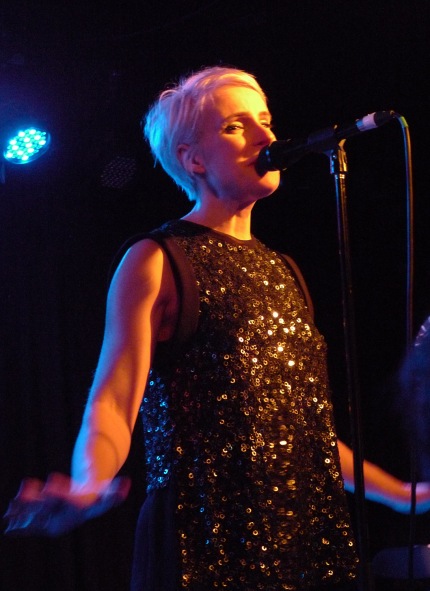 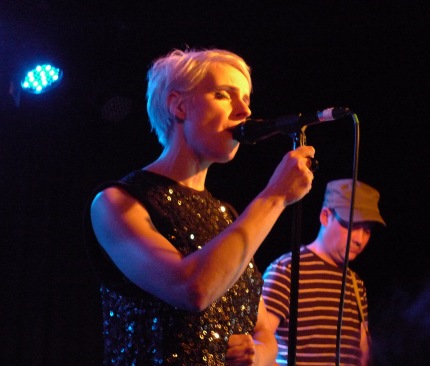 It was a rare treat to hear a b-side I Lost A Friend and I even enjoyed singing along with the rest of the audience to Not So Manic Now – at Sarah’s request.  She said we all sounded “lovely” but she would say that because she is so nice.  Just one flash of that smile and anyone would sing along with her.  The only time I didn’t feel the live arrangement worked was with Self Same Thing, when the bah bah bah bahs were replaced by the keyboards and somehow it didn’t sound quite right to me and I’m not even sure why.  A few tears from Sarah during Ghost were wiped away with what I think of as an example of the perfect pop song: Stars.  The one a lot of us were waiting for; the first song I ever heard by Dubstar and the reason I fell in love with their music.  It was wonderful.

Like I say, I’m not quite sure why I never caught up with them live the first time – maybe because I was not living in London, I don’t know really, but that didn’t stop me this time making the trip over from Bath especially to see them, even though I’m old enough to know better these days.  What can I say?  It was well worth it.  Closing the set with Disgraceful was a grand idea but it just left me wanting more.  I really hope there will be a new album and a tour – and much more from Dubstar. 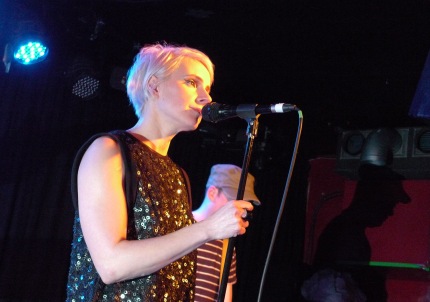 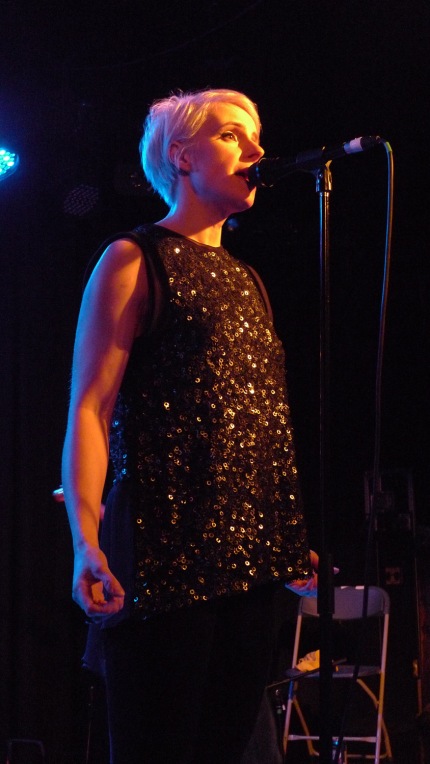 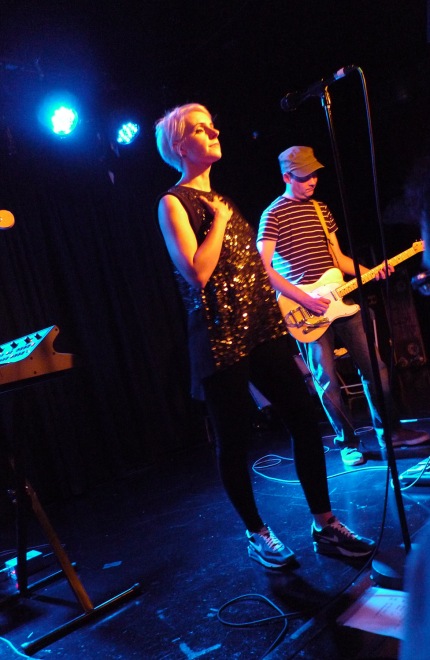 Afterwards Sarah hung out to meet the fans and her friends and I got the opportunity to say hallo to her.  Once many years ago when I was living in London I’m certain I saw her waiting at an underground station drinking a can of fizzy pop – she was dressed down but still looked stunning and I was too shy to speak to her.  Then a couple of years later I saw her with Client at the Barfly, another small venue.  I stood at the front so I could see – one of the perils of being small, and a hero-worshipper, is that you have to be down the front at all costs – and she smiled at me several times; no special reason, it’s just something she does.  It probably helps her to calm her nerves by focusing on someone but as an audience member it makes you feel quite special.  The thing about Sarah Blackwood is that you hope she feels special too because if you’ve ever read interviews with her she doesn’t seem to realise how wonderful she is – she comes across as having a low self-esteem, which is so hard to believe but it’s true.  She must have felt loved on Monday night at least.  I couldn’t swear I was the only female requesting an autograph and the chance to take photographs of her, but it certainly felt that way.  I kid you not, there was what seemed like a never-ending queue of men waiting to meet her and to have their photograph taken with their arms around her – she indulged them all and did so happily and willingly and gave the audience a lot of her time and patience. 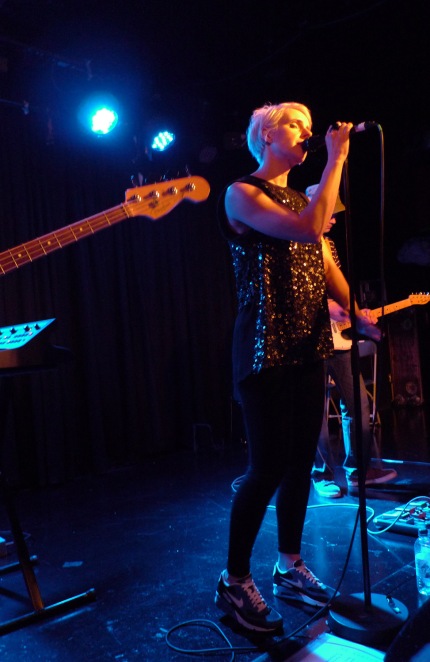 After photographing Sarah I thanked her and told her I thought she was great – I shook her hand and she gave me a kiss on the cheek.  Is she really the loveliest singer in the world?  I think so.  I hope my photos come out …

Thanks to Dave Tinkham of Datapanik Design for these photos.  Apologies for not having any photos of Steve Hillier and Chris Wilkie – I took 3 rolls of film on my Diana F+ so hopefully there will be a few on there if the light was good enough.  Any usable shots will be uploaded as soon as I get my films back from West End Cameras.  The funny thing with the lads, or Steve and Chris if you prefer, was that neither of them knew quite what to do when I asked if I could take their photos; it really felt as if it was an unusual request.  I think they usually leave the photo opportunities to their superstar singer.

Anyway, go and see Dubstar if you can – you won’t regret it.  I am definitely going to try and see them again if the opportunity arises.