Ever since I watched and wrote about Michel Houellebecq meeting Calixto Bieito for the TV show Durch die Nacht mit (aka Au coeur de la nuit), I have been meaning to watch more of the show.  I’ve seen a few now but the latest one I’ve seen was when Alejandro Jodorowsky met Daniel Pinchbeck, again directed by Hasko Baumann, and it was most excellent.

Jodorowsky is described as a film maker, writer, tarot expert and shaman, which reminded me of Garth Marenghi:  “I’m Garth Marenghi.  Author.  Dreamweaver.  Visionary.  Plus actor.”  But Jodorowsky is all of those things and more besides – what comes over is that he is a very understanding man and, above all, a lovely person.  The writer and journalist Daniel Pinchbeck, on the other hand (at least for me), needs to work on himself – he comes across as quite a self-absorbed sort of person who has little time or place in his world for a significant other.  I should forgive him a little for this as his father never really wanted him and had no real interest in him – luckily for him, Jodorowsky offers the advice his father should have given him but never did.

They discuss everything – the mystery of crop circles; collective intelligence; abstract mysticism; collective manifestation; communication with extra terrestrials from the star system Sirius; serpents; space ships; crocodiles; vomiting; useful art (to heal people) as opposed to conceptual art (business for the museums); drug taking.  But maybe Jodorowsky can sense that Pinchbeck is “stuck” because he offers him guidance in the way that he sees best – first of all by suggesting that if you smoke (which Pinchbeck does) and drink, that you won’t live a long life.  Jodorowsky does not drink alcohol, smoke cigarettes or even drink coffee because he wants to live to 120 years or more – I’ve got to say he does not look bad on it at all (he’s about 80 in the image you see above).  It may have something to do with his abstinence but, then again, he does also have something magical in his life: the love of a good woman, and a young one at that (more than 40 years his junior).  His wife is the artist Pascale Montandon.

Jodorowsky tells Pinchbeck that when you find the woman of your life, it’s absolutely evident.  Pinchbeck is still at the stage in life when he seems to want it all, he declares himself happy in his relationship “for the time being” but says he is considering “alternative relationship models” because monogamy is something he finds difficult.  Jodorowsky’s response to this is that “When you find the treasure, you don’t need anything more.”  He suggests Pinchbeck can attain the same happiness he has by healing himself first, putting the past in the past, rejecting all the bitter experiences and moving on.

There’s a hilarious sequence when he explains to Pinchbeck how he can do that – his idea is that Pinchbeck should dress up in his dead father’s clothes, hold one of his paintings, dress his girlfriend up in his mother’s clothes and then “Make love with her, like this.”  Pinchbeck rejects this notion as impossible because his mother is short and his girlfriend is tall and his mother’s clothes will look silly on her, but do you think Jodorowsky sees this as an obstacle?  Not for one second, here’s his response:  “When you was a child, you see your mother very tall.”  No room for excuses, Daniel Pinchbeck!  But somehow I doubt he took the advice.

Here’s a few images of Jodorowsky looking rather fabulous in his youth to break this up for you a little bit:

Jodorowsky takes Daniel Pinchbeck to a hotel to read his tarot cards.  It seems he has previously done a reading for Marilyn Manson:

But in room 26 of this hotel in Paris, he offers Pinchbeck the cards and tells him he cannot tell the future, just the present, but if he has any questions he wants to pose he can do so.  Pinchbeck, surprisingly, asks how he can find some level of contentment and happiness in personal relationships, so maybe there is hope for the boy yet: 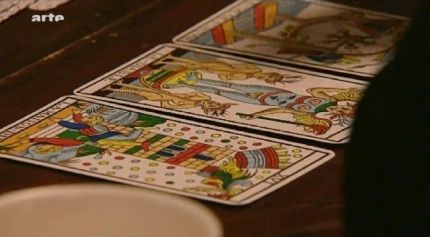 Daniel Pinchbeck thinks that men and women desire different things; Jodorowsky concludes that Pinchbeck has a fear of dominant women and needs to live another 20 years before he will be ready to open his heart and give and receive love, but in the meantime here is his advice summarised down in one of my little diagrams:

But can he put his money where his mouth is?  I guess so, look at the way his wife looks at him:

And the way they put their arms around each other as soon as Pinchbeck leaves their house:

They look very happy to me, so my advice to any gentlemen reading this blog post would be:  Follow Jodorowsky’s advice if you want to keep your lady happy.  And where are my flowers and chocolates, come to think of it?!

Other interesting things from this episode:

An Italian perfume maker loved Jodorowksy’s book so much that he created a perfume especially for him.

Jodorowsky was once ripped off by a “Master” – that’s my take on it anyway, although Jodorowsky didn’t see it that way.  He wanted to be “enlightened” so he went to see a Master (Oscar Ichazo) and had to pay him $17,000 in order to achieve enlightenment.   The Master did this by giving him LSD and one hour later a joint – Jodorowsky’s trip lasted for 8 hours.  After this he made The Holy Mountain, which looks fabulous, and maybe Jodorowsky managed to write-off the $17,000 fee to production costs, I don’t know.  But, otherwise, it sounds like expensive drugs experimentation to me.

Jodorowsky thinks he speaks English like Speedy Gonzales.  He does have a strong accent, but it sounds lovely anyway.

As with the Houellebecq episode of Durch die Nacht mit, I thoroughly recommend seeing this if you can track it down, it’s so interesting and very stylishly made.  My one complaint:  I wish the show was more easily accessible in the UK.

Jodorowsky and Pinchbeck sitting in a tree: togetherness…

What can I say about this?  It was in an album of family photos at a car boot sale.  Clearly the doll was “part of the family”… 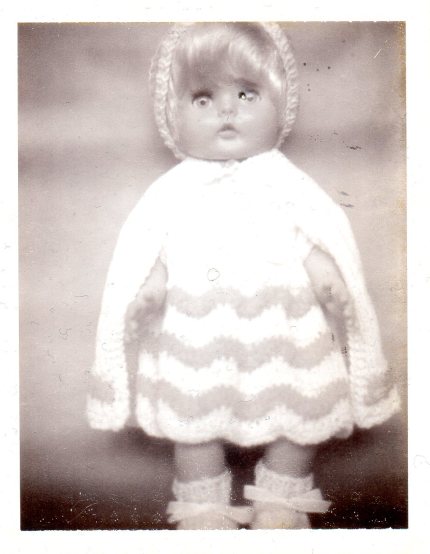 Now, I have previously read Will Self’s comment that Houellebecq is “just a little guy who can’t get enough sex” – but I dismiss this because Houellebecq’s height has nothing to do with anything (unless, of course, he is experiencing problems in reaching for some “top shelf” material) and, anyway, Will Self is, in my opinion: (i) just a guy who looks like a feeble-minded monster, (ii) a verbose and tedious writer.  So why take any notice of his opinionated opinion?

But when considering what I thought Houellebecq might have done with a short film entitled “Eroticism seen by Michel Houellebecq”, I had thought it might be more interesting than it was.  I get the lesbian thing – it’s a given that for some reason or other men seem to be interested in the idea of women together – but why, I wonder, does Houellebecq’s idea of eroticism include various tedious (and essentially pointless) conversations between two of the women?

Woman 1:  Your house is ancient

Woman 2:  12th Century – it was a Cathari fortress.  There’s been a lot of fighting for this place.  In the 20th Century it became an inn

Woman 1:  When did the first men appear?

Woman 1:  When did you plant them?

Woman 2:  No, we didn’t try to find out.  We just buried them.  Naked, in the ground, with nothing.  Above each body we have planted a tree

Woman 1:  Are you sure they were the last ones?

Okay, so perhaps men do not feature in Houellebecq’s idea of eroticism, so there’s no German guy turning up to fix the photocopier they have installed in their 12th Century Cathari fortress – but is there really any need to make excuses for the lesbian sex?  The boring conversations above explain that there are no men, so this is presumably the reason why these 7 women are now turning to each other to fulfil their sexual needs; they’re lesbians by necessity.  But why they even have to go into the history of the Cathari fortress, I don’t know.

Woman 1:  Why do we have to wear the bandeau?

Woman 2:  If we didn’t we would be totally naked and that wouldn’t be quite so exciting – I won’t have seen you totally naked until you remove your bandeau

Woman 2:  Plus, if we didn’t wear a bandeau we would get chafe marks from our rucksacks

Woman 1:  Now you put it that way, I understand

In case you’re interested, I’ve made one of my little diagrams summarising Houellebecq’s “eroticism”: 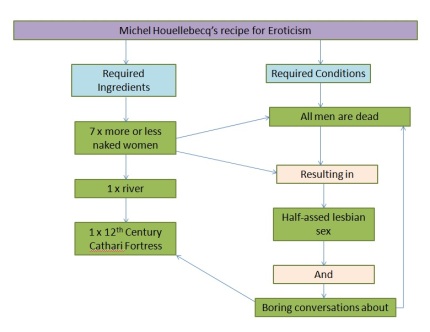