I really like Antoine a lot.  I’ve previously written about him (briefly) on the subject of the Antoine “pill” keyring I have in my collection and he also appears in some of the French music shows I have reviewed on here.  This entry was prompted by my recent acquisition: Antoine’s autograph.

I was so excited to find a signed Antoine EP this last weekend in London.  And to make it an even better find, it was only £7.  Is it genuine?  I don’t know but it certainly looks genuine and I’m happy to have it in my collection.

Okay, so if I was to choose I would get one of the earlier EPs signed but that doesn’t matter – it’s Antoine’s autograph!

My other favourite Antoine items are my Italian language singles and the Antoine autobiography I picked up quite a few years back.

I found Le Divagazioni d’Antoine along with the Je l’appelle Canelle / Un éléphant me regarde 7″ in a charity shop in Muswell Hill a couple of years ago.  They weren’t cheap but they were in great condition and were well worth the price.  Here’s Je l’appelle Canelle and Un éléphant me regarde in Italian – Cannella / Un Caso di Follia (Disques Vogue, J 35140 x 45, 1967):

The other Italian language single I have is a track called Pietre backed with an Italian language version of Pourquoi ces canons (La Felicita’).  I think I got this one in London too, for an affordable price.  It’s amazing what crops up from time to time.  Anyway, Pietre isn’t one of Antoine’s own tracks translated into Italian, it’s an Italian language track he recorded and performed in the Italian song contest Festival di Sanremo in 1967.  It’s fair to say it’s not as strong as his own tracks translated into Italian, but it’s a good track to have and it is backed by the excellent Pourquoi ces canons.  Here’s Pietre / La Felicita’ (Disques Vogue, J 35127 x 45, 1967): 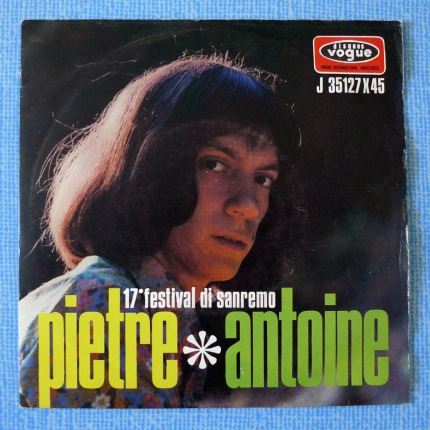 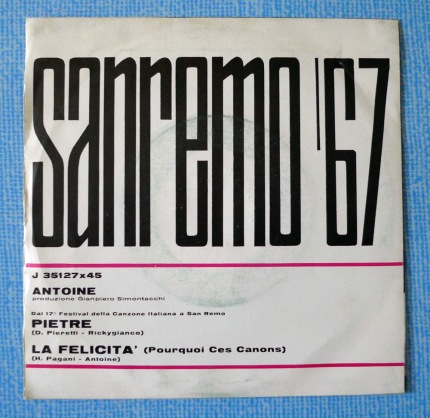 That’s the extent of my special Antoine items, for now.  I’m sure I’ll find other items to join my collection though.

I have always wanted to try and find out more about Antoine’s time spent in London.  In his autobiographical book 1965 Roman (Les éditions Arthaud, Paris, 1987), Antoine recalls how he spent some time in Worthing in West Sussex and how he passed quite a bit of time in London at a certain 24 Milborough Road.  Now, I’m not sure if Milborough Road no longer exists but I certainly can’t find a Milborough Road in London; there’s a Milborough Crescent in South East London and there are Marlborough Roads in various areas in London, but I can’t find Milborough Road. Maybe it’s one of those places that only the initiated can find – Antoine said it was a magical place and that once you discovered it, nothing was ever the same again.

For me Antoine was the real deal when it came to travelling songsmiths – he travelled far and wide with his guitar and had adventures wherever he went.  Some of those “beatnik” hippie types from the 1960s just went for the image but Antoine really lived the lifestyle and what I really like about him is that he never let the entertainment industry take over his life – I read somewhere that once he became famous and was earning some money from music he would work for part of the year and then travel around on his boat for the rest of the year.  Sounds great to me.

Anyway, going back to the London story, Antoine hung out at The Troubadour in the Old Brompton Road and the Café des Artistes in Fulham Road.  He also mentioned a French club called La Poubelle, which was in Poland Street, and The Flamingo.  Basically, it sounds like he found the places that mattered.  He stayed at 24 Milborough Road where 5 girls lived – a wise choice!  His friend Patrick fell in love with a blonde girl called Penny and Antoine got it on with Frederika.  I’m such a nosey so-and-so I want to know more about Antoine’s time in London with his friends and Frederika but I guess I’ll never find out more.  I might have to read the 1965 Roman again though as I remember enjoying it very much when I read it years ago.  That’s all for now, but I’m sure there will be more on Antoine soon.

Postscript August 2013:  I have added some more nice looking Antoine 7″s to my collection:

Pietre / Je l’appelle Canelle / Juste quelques flocons qui tombent / Mon prince et ma princesse EP, Hispavox, Spain, HV27 168 – three of the tracks are in the original French and one was recorded in Italian; nothing in Spanish! 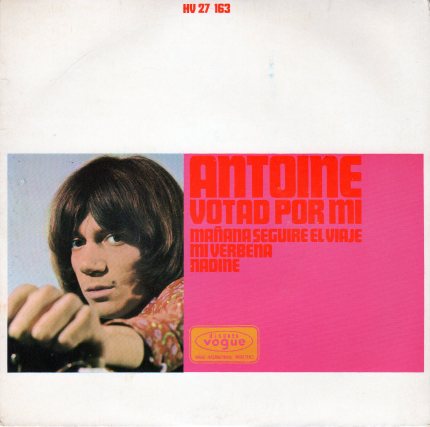 Votez pour moi / Je reprends la route demain / Ma fete foraine / Nadine EP, Hispavox, Spain, HV27163 (these tracks are just the original French language versions but the EP sleeve is so beautiful it’s worth having it for that alone) 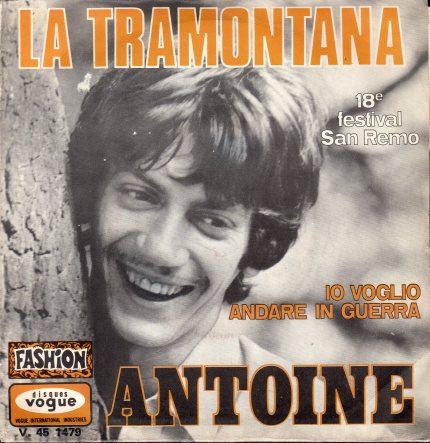 Earlier this month ipanema éditions published a new book about Michel Polnareff – Le Polnabook – which is currently the pride and joy of my Polnareff collection.  It’s a large hardback book, presented in a box, and full to overflowing with beautiful photographs of Michel Polnareff from childhood through to the current day.  The book is well-designed with little pouches containing numerous inserts – reproductions of original concert tickets, programmes, sheet music, postcards, posters.  It’s visually stunning but the problem is I just want to get all the bits and pieces out to look at them properly but I’m terrified I’ll damage the book if I play with it too much.  Here’s me trying not to ruin it too much:

I got my copy via Fnac but I’m sure it’s available elsewhere – the recommended retail price is €44 but I wouldn’t even think about the price; it’s worth every penny and must have cost a fortune to make. 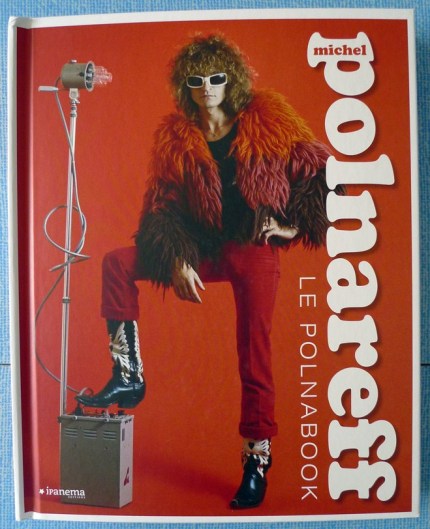 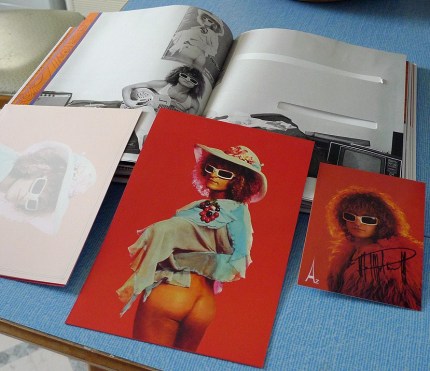 I have various other books about Polnareff, some of which are well-read and used and others not to much.  Here they are in no particular order:

Polnaculte by Benoît Cachin (Tournon, Paris, 2007) was a book I found when I went to Nice to see Polnareff in concert.  It’s well-researched and informative, including interviews with various musicians and songwriters who worked with Polnareff from 1966 through to the 2000s, taking each song, recording and TV appearance in turn.  It’s one of my favourite Polnareff books and one I always use when I’m looking for information for my little Polnareff articles – it comes highly recommended by me! 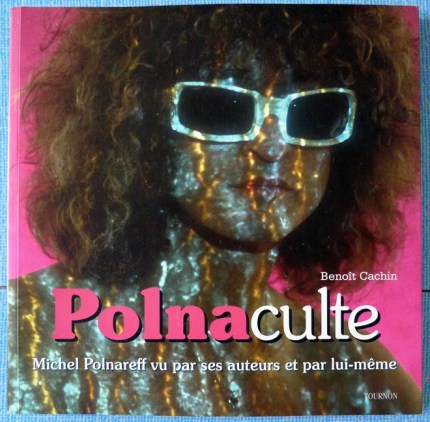 Polnareff Mania by Christophe Lauga (Scali, Paris, 2007) is a book I totally understand – a book by a fan and a massive collector of all things Polnareff.  It’s a book I only bought earlier this year when I went to Paris to interview the French singer Evariste, but it’s one that should be taken very seriously by any Polnareff fan and I’m sure I’ll be referring to it in future articles.

Polnareff Le Roi des Fourmis by Christian Eudeline (Eclipse, Besançon, 1997) is well-used by me and unfortunately it shows it.  For years it was my only real reference book and it’s been a great source of information for me since I bought it in 1997.  It contains lengthy interviews with fellow musicians and friends and lots of invaluable information.  If you can find it, buy it. 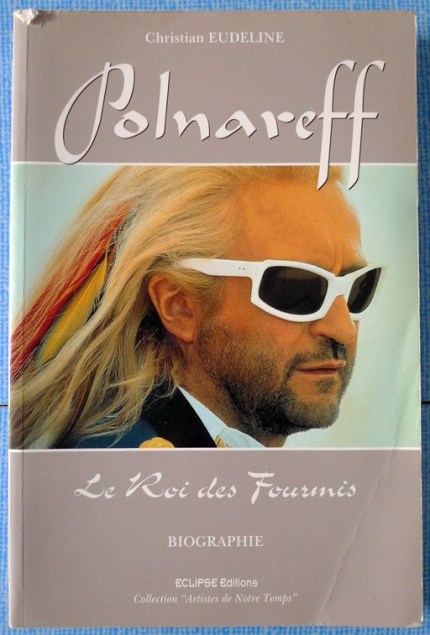 Polnaréflexion by Michel Polnareff in collaboration with Jean-Michel Desjeunes (Dire/Stock 2, France, 1974).  This is the first Polnareff book I ever found and it’s fairly rare now.  Highly amusing but doesn’t really tell the story of Polnareff, just selected highlights.  A must for any Polnareff collector even if there are no photographs or illustrations. 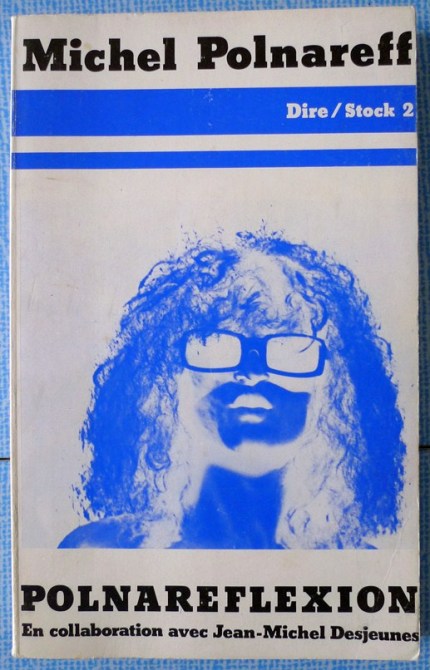 Polnaréférences by Philippe Margotin (Lagune, Enghien-les-bains, 2007) feels, to me, a little bit like a cash-in book to coincide with the success of Polnareff’s comeback tour.  It just seems like a summary of everything else that you can find in the other better books about Polnareff; it doesn’t seem to have any new information unavailable elsewhere but maybe I am wrong.  In any case, don’t take my word for it – it’s cheap enough to buy a copy and try it anyway.

Les Photos Collectors by Fabien Lecoeuvre (Ramsay/Vade Retro, Paris, 2004) is a beautiful collection of photographs of Michel Polnareff in a large hardback format.  It’s not a biographical or a reference book, it’s more of a photography book with informative captions but for any Polna-lover it’s a must – there are lots of photographs in the book I hadn’t seen before.

Polnareff par Polnareff by Michel Polnareff in collaboration with Philippe Manoeuvre (Grasset, Paris, 2004) – this is absolutely hilarious.  I bought this when I went to see Polnareff in concert in Nice and I remember sitting on the beach reading this and laughing out loud.  It is outrageous and unlike its predecessor Polnaréflexion it seems to be more of a traditional autobiography.  It’s great fun but I can’t pretend that I believe everything Michel Polnareff has to say about himself!  Buy it now!

There are, no doubt, many other books about Polnareff and I will inevitably get them at some point or other to join the rest of the Polnabook collection.  I’ll have to do little items on my Gainsbourg, Birkin and Hardy book collections some time soon, when I can dig them out.