Isn’t this the most amazing Weekend cover you have ever seen?  This tells the story of when Barry Ryan suffered burns to his face during promotional activities in Germany.  A very strange story, but nonetheless in keeping with Barry Ryan’s particular brand of operatic pop – melodramatic and exciting!

Here’s the full story in case you’ve not read it before: 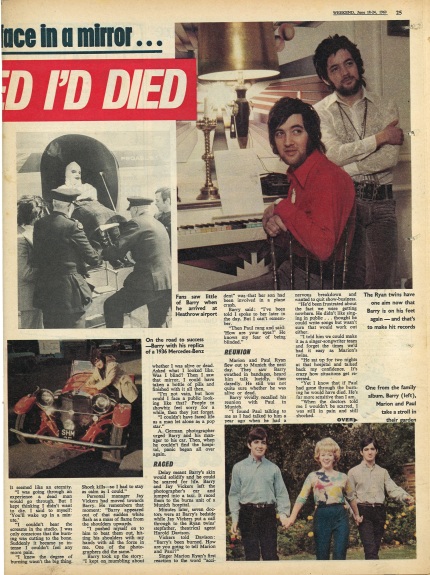 To add to this, I thought I’d share the signed promotional card I bought at a flea market in Berlin.  The German lady who sold it to me said “Paul und Barry Ryan – Eloise!”.  Ha ha!

There’ll be more on Hero Culte about Barry Ryan at a future date.

Postscript:  I recently (August 2013) found this Muziek Parade Dutch photo postcard of Barry Ryan whilst on holiday in Amsterdam so thought I should share it: