Those who regularly visit Hero Culte will know I’m a big fan of Françoise Hardy, so it won’t surprise you to hear me saying that you can never have enough Françoise Hardy records in your collection; it’s a good day when there’s a new release to buy.  And this series of reissues from the period 1962-1966 come from Light in the Attic  who always produce something stylish, so how can you go wrong when considering your next Françoise purchase?

Well, I can tell you that they sound good – remastered from the original tapes – and they look good too.  The original album artwork is used throughout, even stretching to using the original Disques Vogue label design on the discs.  But, it has to be said, those looking for bonus tracks will be disappointed – they are straight reissues.

If you’re wondering whether they’re “unauthorised” reissues, well, I wouldn’t go as far as to say that the reissues have been “authorised” by Françoise herself, but she has carried out an exclusive interview for the releases, which would be a bit of a coup if it was that evident.  I was a little disappointed on this score, but that’s just me.  There’s not a lot of evidence of the interview which is mentioned in the booklet – there are a few comments here and there, presumably because it has been spread over all five releases.  It may have been better to include the interview in all five releases in its entirety, but that’s just my opinion.

As for the rest of the detailed liner notes , they’re a good starting point for those who know little about Françoise and don’t speak much French – her many biographies and autobiographies have not been translated into English yet.  But, egotist that I am, I couldn’t help thinking that I would have done a better job myself.  For example, to say she was brought up by her mother because her parents had separated is not quite true; they were never truly together as her father already had a wife.  So discreet was this relationship that Françoise believed for a while that they must have divorced – even though divorce was frowned up at the time, it was better that than to discover that both she and her sister were born out of wedlock.  And, although it goes unstated in the liner notes, the reason she became proficient in German was probably because of her mother’s boyfriend “the baron Gilbert von Giannelli” who convinced her that Françoise and her sister Michèle should learn German, sending them off to a village near Innsbruck called Natters.  Also, why is Françoise quoted as saying she never met Monica Vitti when they worked together on Vadim’s film Château en Suède when there is photographic evidence to the contrary? 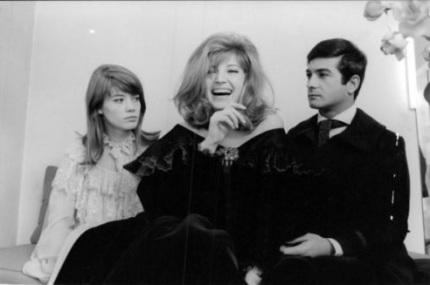 None of this matters, of course, it’s just me being pernickety.  Anyway, I should stop moaning and be grateful that there are some reissues available for the English speaking market, so, back to the releases – all of them are available on CD now and on 180-gram vinyl from 29 January 2016:

I’m not going to sell the music to you – any fool knows that these albums represent the classics of the 1960s Françoise Hardy back catalogue, when she could barely put a foot wrong (although it should be said I love her entire discography).  It’s all very easy on the ears and with such lovely artwork and beautiful photographs it’s a pleasure for the eyes too.

All five of these releases are being distributed in the UK via London based music distributors Southern Record Distributors, so they should be widely available in all good record shops.  Go out and buy the CDs now – or wait for the gorgeous new vinyl copies in January 2016!