As a big fan of Jane Birkin I usually try to see her whenever she is in the UK.  Over the years I have missed very little but I find that now as I get older and now I no longer live in London it is hard to keep up to date with what’s happening and sometimes it’s even impossible to get to Jane Birkin events.  I managed this one thanks to a friend posting about it on Facebook (you see, it has its uses…) with plenty of notice – but normally I would be on the first or second row or something and this time I was back on row G for goodness sake! 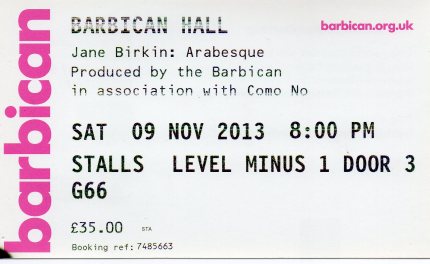 I have seen Jane do the Arabesque set a couple of times before – the musicians she works with are excellent and then she has her beautiful red satin dress and indulges in a bit of “Jane dancing” (if I call it “Jane dancing” enough it will become a thing and anyone who is overly familiar with Jane Birkin’s work will know exactly what I am talking about…) too so it’s always worth a look if you have not managed to catch this arrangement live before.

Here’s the “programme” they gave out at The Barbican:

There was no memorabilia on sale at the concert, although I took my own homemade “Birkin bag” with me, look: 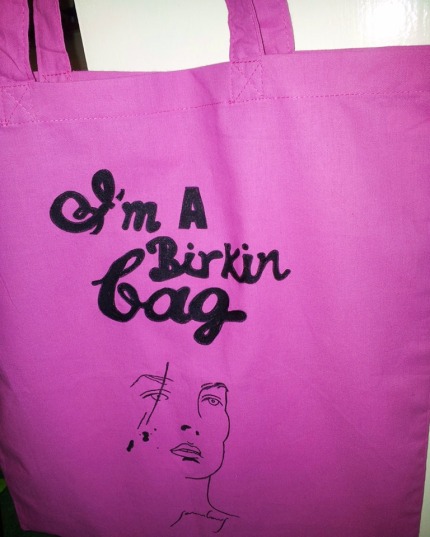 The Birkin bag you can afford!

Anyway, back to the concert which was at the amazing Barbican:

The set was pretty standard for Arabesque but I made notes to document it anyway:

The set started out solely with piano accompaniment as Jane sang Physique et sans issue and this was followed up with Une chose entre autres and Ces petits riens.  Jane then went solo, sitting at the front of the stage to recite the lyrics to La chanson de Prévert.  After this she was joined by the entire band Djam & Fam (band members names are listed on the programme above) and they started out with Elisa, followed by Et quand bien même and Couleur café. 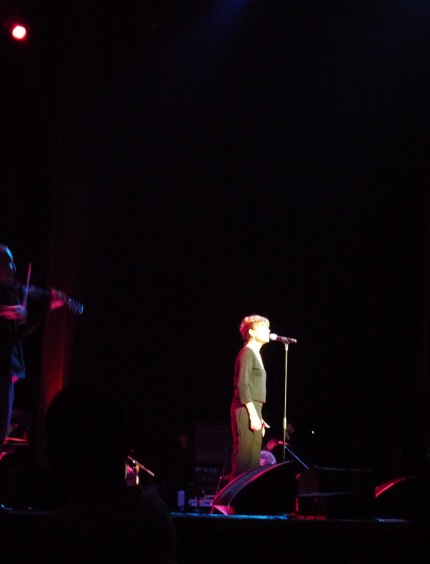 Then, as is customary, Jane read her nephew Anno’s poem for his mother, Close to the River, followed by another recital – this time one for Serge Gainsbourg, Dépression au-dessus du jardin, which remains one of my favourite Gainsbourg songs ever.  I don’t know if Jane was trying to make me cry at this point because she followed it with Valse de Melody, another favourite.  Thank goodness she paused to explain how long she has been working with Djam & Fam and how many concerts they have done together over the years (about 365 concerts, not including this tour – wow!) as this gave me time to compose myself before she came back with a change of tempo. 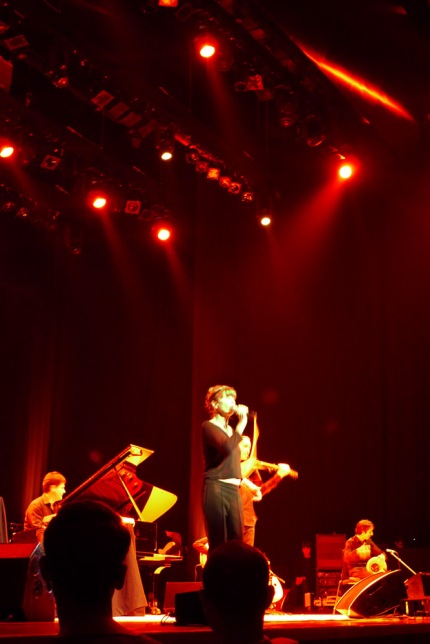 Haine pour aime was followed by yet another sad number Amours des feintes so the mood didn’t stay upbeat for too long though.  The band were then introduced and their instrumental She Left Home allowed Jane time to exit the stage to change into her fabulous red dress and barefeet ensemble. 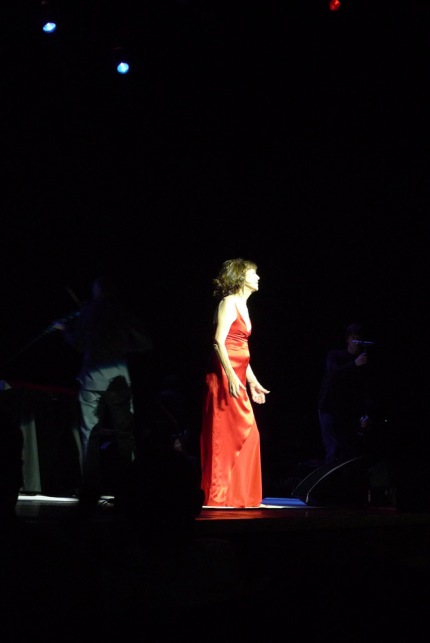 Les dessous chics doesn’t really lend itself to dancing but Les clés du paradis does and although it’s an Arabesque standard it’s the first song she performs that is not a Gainsbourg number; it’s Alain Chamfort though so that’s acceptable, I guess.  So, this is where Jane lets her hair down and does her “Jane dancing”, which is hard to describe but it involves her long limbs being thrown about like crazy, it’s not a good look but I love her for it and she’s such a good sport and takes the audience encouragement and runs with it – almost literally in this instance as at one point it looked like Jane was pretending to be a horse in a jump race.  I’m pretty sure Jane usually does more “Jane dancing” than this but she has been quite ill lately so maybe she’s trying not to overdo it – she still looks fabulous though and I am sure she is on the mend, so that’s okay.  Anyway, “Jane dancing” out of the way we get back to serious business with Fuir le bonheur de peur qu’il ne se sauve, Comment te dire adieu and Baby Alone in Babylone.  The night ends with Jane’s a cappella version of La Javanaise, which the audience participate in for the sections where they can remember the words!

It was an excellent concert from Jane, who was in fine voice, and I enjoyed it very much (despite my migraine), even if it did feel short.  I shall be posting something very soon about the wonderful Jane & Serge: A Family Album book recently published by Taschen, so keep an eye out for that.

Thanks to Dave Tinkham of Datapanik Design for the photographs, taken surreptitiously at The Barbican – taken from a distance and quick shots to stop the ushers from giving us a ticking off (they are very strict…), so excuse the quality although I like them a lot.