Last month I went to see Claudio Simonetti’s Goblin play at The Fleece in Bristol.  It was an excellent experience – I didn’t imagine it would be quite as good as it was.  Simonetti has a sweet stage presence; laid back, confident, fun and a good rapport with the audience.  And to add to that he has great backing musicians who are able to reproduce the Goblin sound – it really didn’t seem to matter that it wasn’t the original members of the band at all.

After a few initial technical difficulties and an incident involving an amp being dropped face down on the stage (ouch!), Goblin played for about 90 minutes treating the audience to what I like to think of as “all the hits”.  Here’s the set list for the evening:

I got myself a position down the front near Claudio Simonetti so I could try and get some photos during the evening.  I should explain that for many years I didn’t own a camera and it’s only in recent years that I have started to take photographs, but I prefer analogue to digital and I either use my Diana F+ medium format camera or my Olympus Trip 35.  I used the Olympus Trip on this occasion as it tends to get great results with low light situations, whereas the Diana F+ needs a lot of light or a flash to get a good clear image.  I don’t like using the flash on the Olympus Trip because it is absolutely blinding and would be a source of great annoyance were it to be going off all night, especially in someone’s face.  Anyway, I don’t know much about cameras or how they work, I just tend to point and click so let’s get the vaguely technical bit aside, the lighting was good and I think the photos are alright too.  But first of all, here’s a digital photo of Claudio Simonetti’s keyboard set-up: 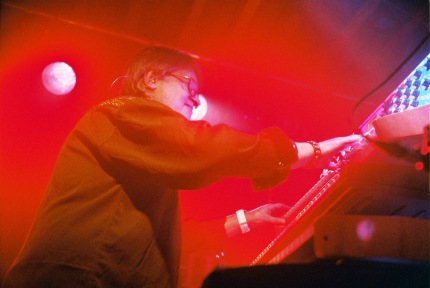 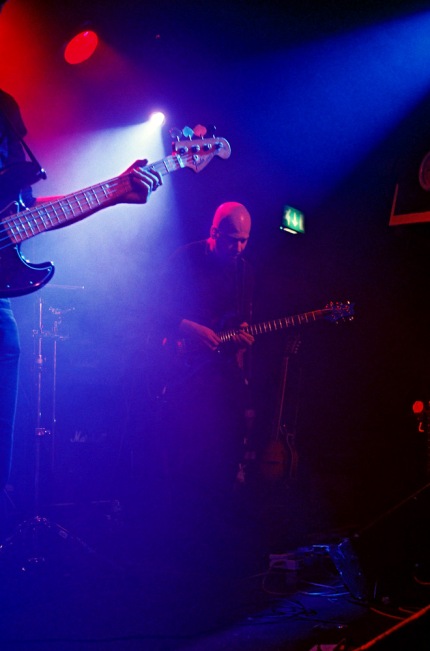 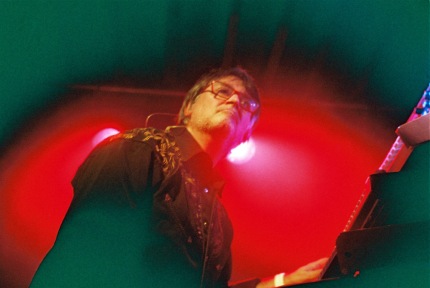 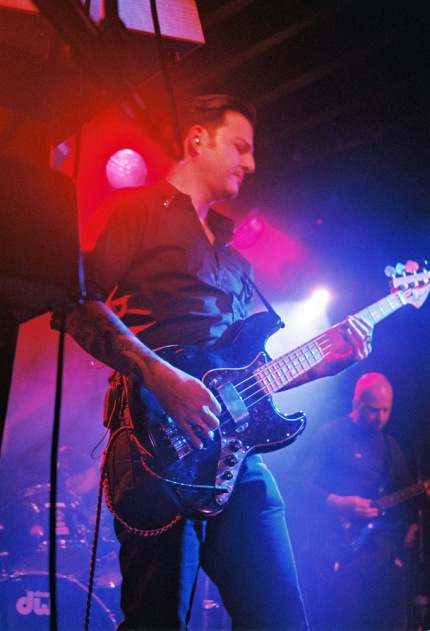 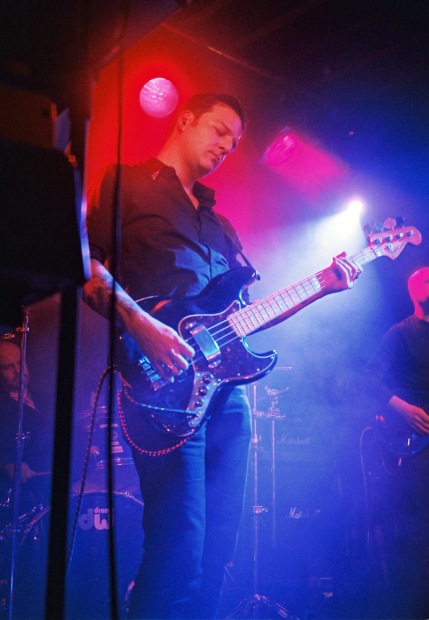 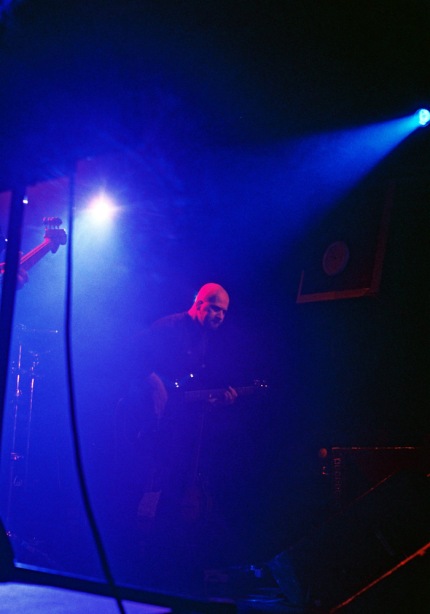 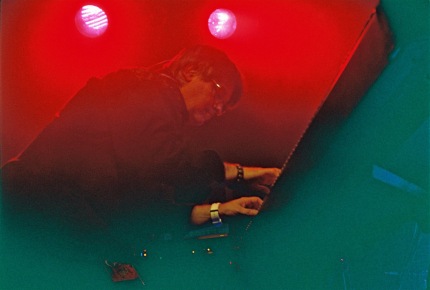 I’m sorry I couldn’t get any photos of the drummer – he was hidden by the massive keyboard set-up – and the photos of the band are as good as I could get them given that I was standing right over the other side of the stage.

I should say a few words about the support band Anta – I think they’re a Bristol band and I don’t know how they would describe their sound but it was LOUD.  I have never seen so many effects pedals in my life – I swear the bassist had about 30 – and I have never seen a bassist play in such a way either:

Very expressive face, that guy, and I couldn’t say I liked this piece of music or that piece of music because the set seemed to consist of one 30 minutes+ track – I liked it though.  I didn’t know what to make of them at first but they’ve really got their shit down pat and I was very impressed.  An excellent choice of support band for Goblin.  I would recommend checking them out if you get a chance to see them.  They have a website here.

Whilst looking through the Goblin photos, I remembered that I hadn’t yet posted about seeing Dario Argento at the BFI Southbank in November last year.  I went to see the Q&A with Dario Argento and the screening of Suspiria and between the two events I found out that Dario Argento would be doing a quick signing session for fans – so I met him.  I took the opportunity to upgrade my Cat O’ Nine Tails DVD to Blu-ray and I got the cover signed: 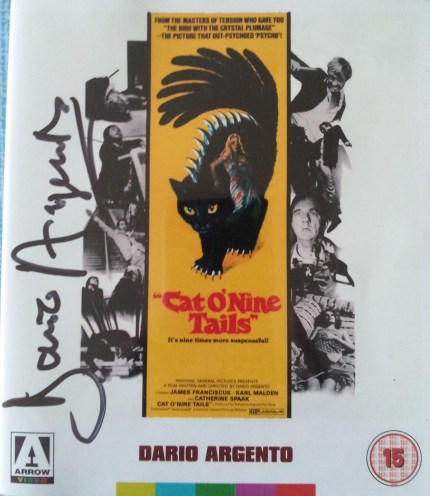 Dario Argento was lovely – he greeted me as if he knew me (arms wide open and a big “Hey!”) and he even posed for a couple of photos but I wasn’t allowed to use a flash (I wasn’t supposed to be taking photos actually!) and the lighting was terrible so they’re not so good.  Here you go:

Here’s one photo I took on digital from the side:

Dario (o yes, we’re on first name terms now, “Hey!”) told some very amusing anecdotes during the Q&A – one of which concerned Robert Hossein, who Dario worked with on The Rope and the Colt in the late sixties.  Great film, that.  Anyway, Dario was working on the script and expecting to meet with Robert Hossein but he was very late one day so Dario called on Hossein and realised why he was running late – he had company, lots of company, in his bed.  Hossein asked Dario if he wanted to join them but he politely declined (so he says!) saying that he had a script to write.  The more I hear about Hossein, the more I like him.  Fabulous film maker and actor but from the sounds of it a naughty man.  I should write something about him soon, I think.

Anyway, that’s enough for today.  Hope you like the photos – there are plenty of clips of Goblin’s performance at the Fleece on YouTube if you want to check out the show.

All photos by Raechel Leigh Carter (Hero Culte) – if you’re going to link to them or use them, please be decent and credit me. Ta!

I love The Zombies.  I bought this Fabulous magazine today just because they were in it.  It was a bit pricey but, get this, they’re in a photo story with Screaming Lord Sutch, Adrienne Posta and the Daleks!

There’s also a short interview with The Zombies and a two page colour poster:

I went to see The Zombies in concert at the Tunnels in Bristol in May 2012 and they were amazingly good.  They seem like lovely chaps too – they sell signed merchandise and you can buy items from just a few pounds.  Whilst I was buying some of the merchandise – a poster and a book about The Zombies – my boyfriend saw Colin Blunstone and asked him to sign my Odessey and Oracle LP for me (Polish issue, original version – but without the fabulous artwork of the UK issue; as it’s one of my favourite albums ever I need to track down an original UK copy at an affordable price some time…): 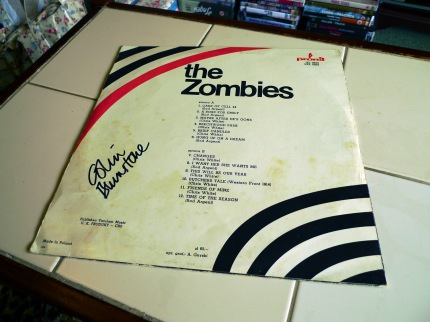 It was an amazing set they played.  Here’s the set list etc from the gig: 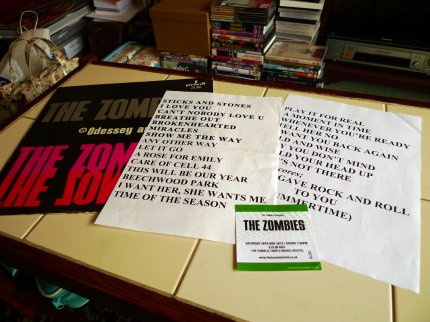 And here are some of my photographs – the ones of Colin are a bit too close but I was stood right at the front of a small venue with my Diana F+ camera, which you can’t control too much.  There are a couple of funny ones of Rod Argent progging out on the keyboards – I used the bulb flash for a long exposure to get him shaking his head about: 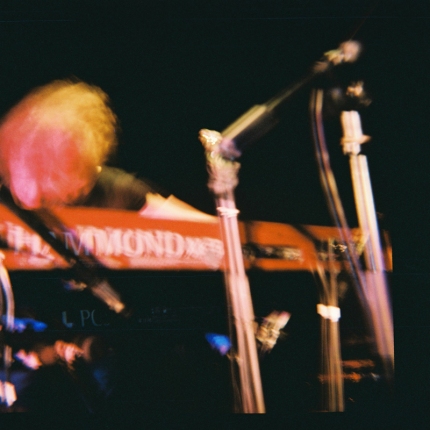 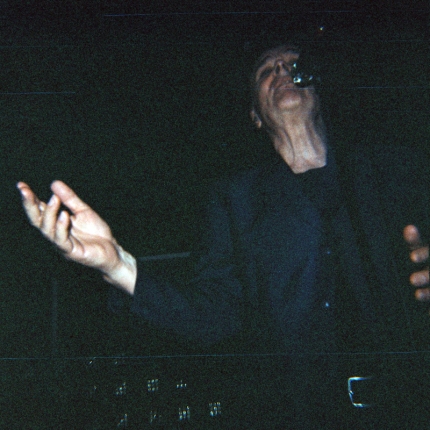 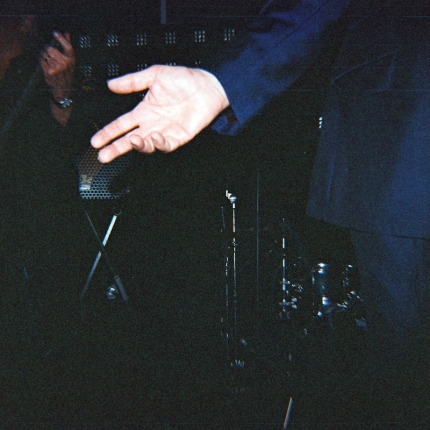 My pictures are not that great, I know, but here are some better ones taken on an Olympus Trip 35 by Dave Tinkham of Datapanik Design: 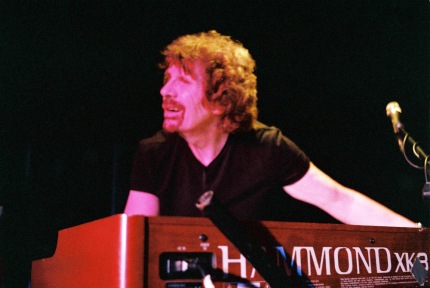 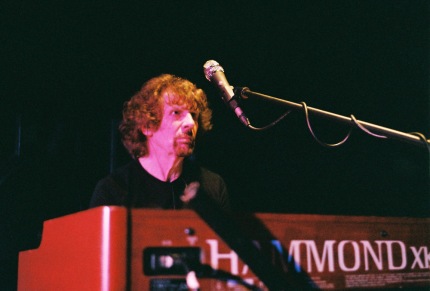 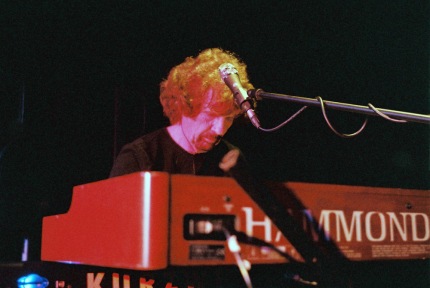 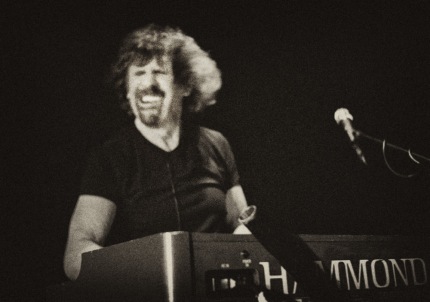 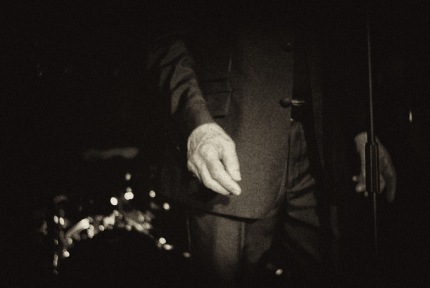 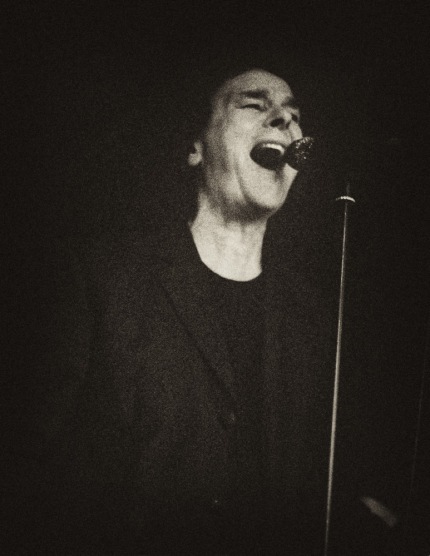 I would recommend going to see The Zombies in concert when you can.  You can find out more on their official website and on Colin Blunstone’s personal website.