One of my favourite French singers is the wonderful Françoise Hardy.  Aside from her extensive career as a singer and songwriter, she works as an astrologer and from time to time has also made appearances in feature films.  Here on Hero Culte I will bring attention to some of the films Françoise Hardy has appeared in – Françoise Hardy on Film part one focuses on Clive Donner’s film What’s New Pussycat? (1965):

“I was asked to participate at the end of the film and I agreed in the hope of glimpsing Peter O’Toole.  But the filming was so fast that I have no recollection of it.  I know that it took me an afternoon and I got paid 2,500 francs, which was a lot at the time; I thought it was good pay for meeting Peter O’Toole.”  (p31)

It was a great choice of film to appear in, with a ridiculously silly script by Woody Allen (another hero of mine, but that’s another story…) and a top-class cast including the gorgeous Romy Schneider, the even more gorgeous Peter O’Toole, Peter Sellers (looking like he was auditioning to be in a garage punk band with his large glasses and Prince Valiant haircut and velvet suit)  and the fabulous Howard Vernon, amongst many others. 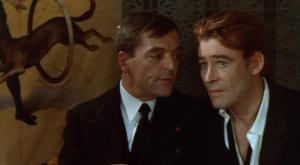 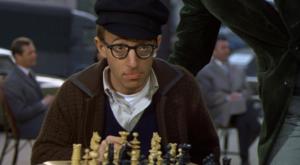 The DVD of the film is readily and cheaply available if you should want to see it.  Expect to wait a long time for Françoise Hardy’s appearance, however, as she really does appear at the end of the film (1hr 42 minutes into a film lasting only 1hr 48 minutes including the credits) and then it is just a very short appearance: 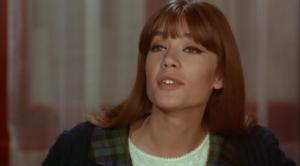 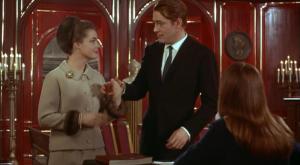 Françoise is the Mayor’s Assistant who records the marriage of Michael (Peter O’Toole) and Carole (Romy Schneider) and somehow manages to come between the newly-weds when Michael refers to her as “Pussycat”, as a result Carole tells him that he can go on the honeymoon alone. 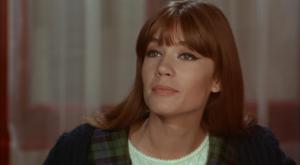 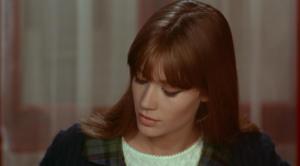 As Michael and Carole argue, Fritz Fassbender (Peter Sellers) takes the opportunity to introduce himself as the witness and best man.  He tells the Mayor’s Assistant that his name, for the record, is Fritz Wolfgang Sigismund Fassbender and she tells him, “I can’t spell Sigismund.” 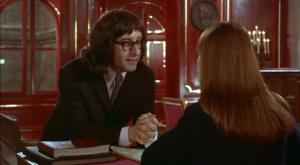 Dr Fassbender decides that her inability to spell “that naughty name” Sigismund indicates a sexual block and as a result he takes her on as his new patient.

Michael and Carole continue to argue in the background and the credits roll.  That is your lot.  But it’s such an entertaining film and the soundtrack music, which would seriously have benefited from a track by Françoise Hardy, is arranged by Charles Blackwell, who worked fairly extensively with Françoise back in the 1960s.  And, of course, Françoise looks fabulous so What’s New Pussycat? is a must for any Françoise Hardy fan.

That’s all for now, Françoise Hardy on Film part two to follow at some point in the near future, so come back soon!

(The English translation of the quote from Françoise Hardy – superstar et ermite is by me, mistakes and all; I try my best, folks!)